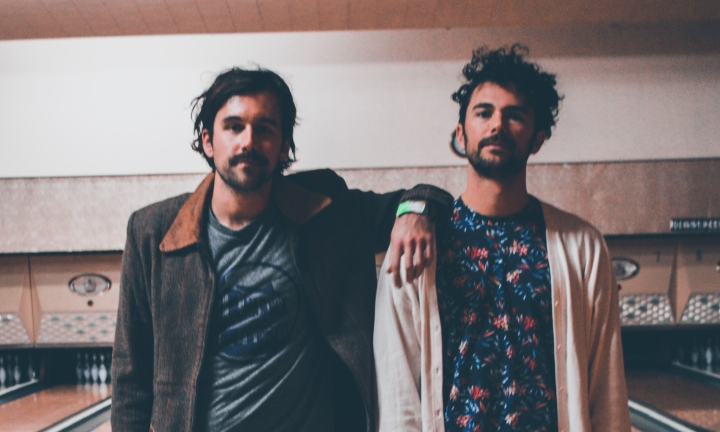 The vibe at Mahall’s 20 Lanes in Lakewood is the perfect location for musical duo Tall Heights to let loose. With an atmosphere akin to a 70’s vintage feel, the best known bowling alley in Cleveland welcomes friends and artists Tim Harrington and Paul Wright for their fifth show on their album release tour.

The alley itself is empty, lanes slightly glistening after being cleaned and prepped for the evening. Cleveland fans are filtering in from the chilly night air, hanging out in the lobby or grabbing a drink at the bar as they wait for the opening acts to begin.

Harrington and Wright sit next to each other at one of the bowling lanes after they finish their sound check, a bit tired and relaxed after practicing their set.

The duo is originally from Boston, starting off as street performers before relentlessly touring together to grow their experience and share their music with anyone who was willing to listen.

Now, they are currently on tour from Oct. 11 to Dec. 1 for their album release tour, sharing their newest music from “Pretty Colors For Your Actions,” that was released on Oct. 5.

Harrington and Wright came together and formed Tall Heights in 2009, after they both realized in high school that they had a shared dream of working on music. Both artists provide the vocals for their sound, all while Harrington focuses on guitar and Wright on the cello.

“It  comes with a lot of trust and perseverance,” Harrington said, regarding their evolution not just as musical partners but as friends. “We know each other very well and we’re really good friends to the point where he’s just another one of my brothers.”

Harrington mentions that their friendship is something that has helped them come together and form their sound, and after having worked together for as long as they have, they eventually found the sound that worked for them, describing it as morphing two voices into one. A kindred spirit is felt between the two artists and is shown through the work they put out into the world.

In the beginning stages of their partnership, they would each write songs about their own lives and experiences. However, now that they spend so much time together, their songs have evolved into shared experiences and information that they feel comfortable sharing with others.

Wright shifted in his seat, acknowledging that when they were younger, they would write about their romantic relationships with people, but wouldn’t dig into any deeper stuff too often.

“Now what is scary is having songs out there that have gotten attention and impacted people, and making a record that continues to speak to people,” Wright said, adding that they want to push themselves to continuously write better songs as time goes on, not sticking to the same vibe with each album that comes out.

Harrington also feels that there isn’t a need to label how their sound has evolved over time, because at the end of the day opening up about experiences and emotion is always scary.

“The strand through the whole thing is that when you’re songwriting, you’re opening up your heart and exposing your insecurities and fears and concerns,” Harrington said. “We don’t need to label what it was then versus what it is now because it’s always the same thing.”

When Tall Heights first started recording music, their sound was synonymous with how they sounded when street performing — two people, two instruments. When they released “Neptune,” they pushed their own envelope on what initially defined them and tried out a more ambient and electronic sound.

“That was scary at the time, we were worried that people wouldn’t like it and then we realized that the sound of our voices together is the true identifier for us, so realizing that gave us the freedom to write this new record,” Wright said. “[The freedom to] not worry about what people would think because that shared voice is continuous throughout our whole catalog.”

According to Harrington, when it comes to a production level, they are free because they have that consistent sound with their vocals, so adding in any type of instrument is acceptable because their voices and songs are still present. For “Pretty Colors,” they recorded the songs that they loved in a way that was honest and hardworking.

“We created a record that captures the pretty colors of who we are and now we’re offering them up to the world in exchange for their actions,” Harrington said.

The two artists have grown a lot over the years, going from street performing to traveling all around the globe opening up for some bands they have idolized for years. Wright said that a memorable moment for him was traveling with artist Ben Folds, who has worked closely with artists like Sara Bareilles and William Shatner.

For Harrington, one of his favorite moments so far has been when they finalized the “Pretty Colors” album. While they were on tour with Judah & the Lion and Colony House, they were also going back and forth through email with someone who was sending them mix ideas.

“I was the one typing this email, collecting the notes from Paul, my own notes and putting the last few tweaks on it. Then he sent us the final mix, we listened to it, he listened to it, we said it was good to go,” Harrington said. “I hit send on that email and it was a real emotional moment for me.”

In addition to memorable moments showing their growth as artists, Tall Heights also has some funny stories from the road as well. One that they mentioned was while they were on tour with Judah & the Lion, driving from Chicago to St. Louis in 50 degree weather.

While on the road, they hit the worst storm that their tour bus driver had ever seen, who had been driving busses for over 30 years at that time.

“We sat there in [our van], the 60 mph winds were rocking us from side to side, we had a little bit of gas left, a couple of donuts, just sitting there watching the snow pile up,” Wright said, laughing lightly at the memory. “We got there 30 minutes before our set versus 6 hours before our set and threw everything on stage. Given everything we went through, it was like we had no choice but to give it [our] all and put everything [we had] into it. It was a really special show, the end of the tour and a great feeling of accomplishment.”

Wright added that after talking to people at the end of their shows and hearing what the songs mean to people makes everything they deal with getting from one gig to the next so worthwhile.

The track “House on Fire” is one that both Wright and Harrington are excited for fans to hear, especially live. The song was one of the last they wrote and Wright shared that it is exciting to see it come to life onstage and see people react to it.

For the album as a whole, they just want fans to listen to it from start to finish and take with it what they will, according to Wright.

Going deeper into that, Wright and Harrington just want fans to have an emotional experience at their shows in one way or another.

“We want them to receive something that we spent a lot of care and time and effort into creating, something that we care alot about and we want them to receive it like that,” Harrington said. “It obviously doesn’t need to be some highbrow experience but just a shared appreciation of each other. At the end of the day, playing live shows is about sharing the songs that we create and offering them up in a way that feels authentic to that song and part of that is this openness to experience and emotion.”

Originally published with The Cauldron.

thank you for stopping by! on this website, i share a little bit of life, faith, and little things in between.

❤️🖤❤️
It feels like I just posted a review of 2018 yesterday, yet here we are all looking back at 2019 already. 2019 threw a lot of good my way. Sure, there were many emotional downsides because apparently we can’t get through life without them. But I had a lot to be grateful for in 2019. I was able to welcome the new year with my mom making it through some very scary close calls and hospital visits. I turned 23!✨ My family and best friends flew all the way from California to watch me graduate with a Bachelor of Arts in Journalism. I got into + started grad school, studying for a Master’s of Legal Studies at Cleveland Marshall College of Law. I started a new job as a graduate assistant. I bought my first car and moved into my first apartment. Celebrated a year with my boyfriend 💕 Flew home to California and celebrated the holidays with everyone I love. & honestly so much more. But when I think about these things I feel happy, I feel proud and I feel like regardless of any issues in the year, these things make them all worth it.♥️ Looking forward to 2020 to see what other experiences life will throw my way! #bestnine #bestnine2019
23 • Happy Birthday!✨ Even though we spent the first half of the day traveling from airport to airport, I’m glad you’ve enjoyed the rest of your birthday. I love you, you already know how much! ✨💕
Wonderful week home for the holiday 🎄❣️also plz swipe far right for the most adorable picture of my grandma ever
Christmas in Coronado ✨
ya did it ✨ congrats rach! 💕
%d bloggers like this: